One of my central concerns has been to think about medieval and early modern conceptions of space—place, landscape, and affective resonances around the built environment. I am dissatisfied with the established practice of scanning maps, geotagging them to known geography, and attaching text layers.

An early effort took eighteenth- and nineteenth-century maps of Delhi and rendered them according to spatial descriptions in textual accounts of the city. We considered creating and structuring an archive of Delhi that combined maps, historical texts, and rich text along with scholarly commentary and annotations. Our sources included Persian histories of Delhi, such as the Salih-e Amal by Kanbo, the Ma’asir ul Umara, and travel accounts such as the memoirs of Bernier, Tavernier, and Dargah Quli Khan. We added detailed descriptions of Delhi by Mirza Sangin Beg, Sir Sayyid Ahmad Khan and Bashir ud Din Ahmad. All of this information was encoded on Mughal maps of Shahjahanabad and earlier maps of the city commissioned by British imperial administrations.

While this added a much needed spatiality to modern and early modern texts, the question of the medieval understanding of space remained for me. I began to think of space and place as nodes of an organizational chart.

My next effort was to represent places in a ninth-century conquest narrative—al-Baladhuri’s Kitāb Futuh al-Buldān—as an organizational chart, jettisoning the artificiality of the cartographic imagination. I was interested in translating circles, lines, nodes, and distances from a center into campaigns, regions, areas, cities, and battles. The intent was to make an Argumentative Map that spatialized the narrative without flattening it. I attempted to encode into numerical data aesthetic, political, social, cultural information in the narrative. My goal was to get closer to seeing how medieval and early modern representations of space can be visualized, but also to work towards making argumentative DH projects—projects that go beyond scan and post.

I taught a graduate seminar on Borderlands in the spring of 2015. As part of the seminar, I also took on the exercise of constructing a map. I worked closely with Emily Fuhrman and Jeremiah Trinidad-Christensen. For the exercise, we picked a tenth century geography—Ibn KHurdādhbih’s Kitāb Masālik wa Mamālik—and plotted the journey into Sind’s cities from Iran. For constructing the map, we took our cue from James C. Scott’s The Art of Not Being Governed where he produces a map of walking-time through mountainous territories. The resulting map is: Delivering Posts by Foot in Medieval North India. The GIS data was collected from various primary sources and the visualization was done using Leaflet.js.

In 2015-16, I am interested in teaming up with other medievalists and mappers to take on a bigger text—Abu’l Fazl’s Ain-i Akbāri—to make an administrative map of Mughal India in the sixteenth century. 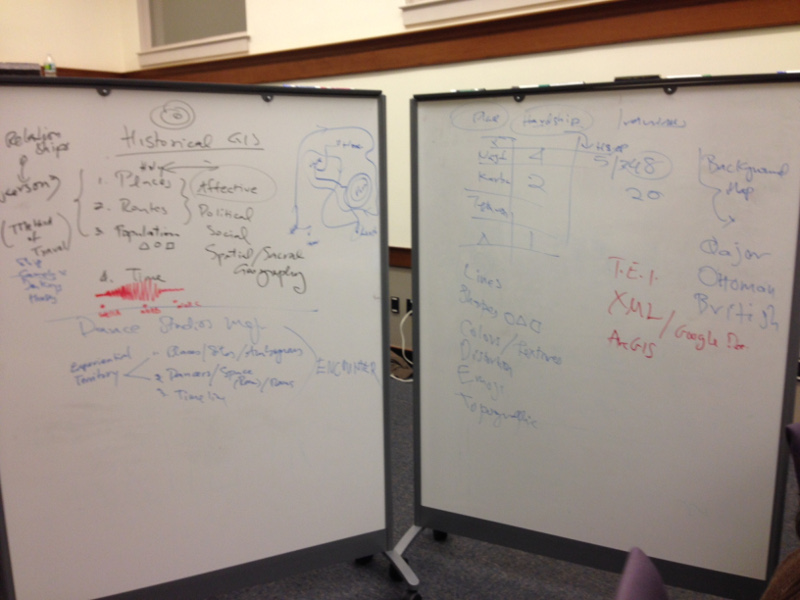