Read the original post at jonreeve.com. Link to a beta version of the webapp here.

Have you ever wanted to livetweet a book? I often want to. Yet there doesn’t seem to be a standard way of doing that. You could tweet, for instance, “Oh Captain Wentworth! When will you propose? #JaneAustenPersuasion” but the hashtag isn’t standardized, so some people might be tweeting under #Persuasion and others under #AustenPersuasion. Furthermore, the hashtag isn’t specific enough to make it clear which part of the book you’re tweeting about. If you browse other tweets marked #JaneAustenPersuasion, you might find comments about other parts of the book, which may contain spoilers.

Enter Annotags, a concept for a literary annotation hashtag, or annotag. Whenever you want to tweet about part of a book, use illustrated format.

Any other sources can be added to this list. I’m working on a way to shorten DOIs, for instance.

The next letters and numbers before the colon are the book code, optionally encoded in base 62. What is base 62, you ask? It’s just a mathy way to take a long number and convert it to a short string of numbers and both uppercase and lowercase letters. That way, you can take an unwieldy ISBN—the ISBN for the Norton Critical Edition of Jane Austen’s Persuasion, for instance, is 0393911535—and write it as “Xepzv”. Both I0393911535 and iXepzv are valid annotags, but the latter saves five characters, which you can use to write “LOL!!” or whatever your heart desires. To try this out, grab an ISBN of a book from Amazon.com or equivalent, remove all the hyphens and paste it into a converter like the annotag calculator I wrote here, which will convert it into base 62. Some book IDs won’t benefit much from encoding, of course. Many Project Gutenberg etexts IDs are short anyway, so you might as well keep them as-is. The Project Gutenberg ebook for Persuasion, for instance, is listed as “EBook #105,” which can be represented as the annotag #G105. No calculator required.

Next, there is a colon, followed by the location code. The location code is made up of chapter numbers, page numbers, or whatever you like. If you want to get super-specific—say, if you’re annotating a particular word or phrase—add a line number or word number. If your book doesn’t have page numbers (if you’re reading an etext, for instance), you can index your location any way you want—by chapter and paragraph number, or even chapter, paragraph, and word. This is simple, intuitive, and human-readable. If your book code is G105, and you want to tweet about something that happens in Chapter XXIII, you can tweet “Oh no you di’n’t, Captain Wentworth! #G105:c23”. Because the annotag is only eight characters, you have another 130 or so for your witty, insightful commentary.

Here are Some of the Advantages of Annotagging:

There are lots of ways that apps could interface with this type of protocol. Here are some ideas:

Annotags would also be useful additions to a print book’s back cover: 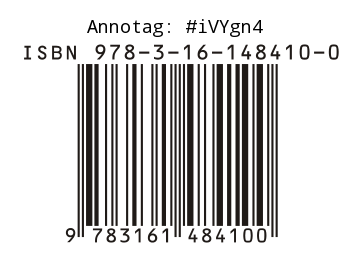